Finally got the 2013 issue, this one features artwork from Florian Marschall.

Given to me a few months ago (1 one of 3), this one is not “watermarked” but comes with the ASEAN overprint. The paper has a coupon bond-ish quality/texture, the ink seems faded, it also arrived to me crumpled and a bit worn to give the “used-circulated” look.

*NOT FOR SALE, just sharing 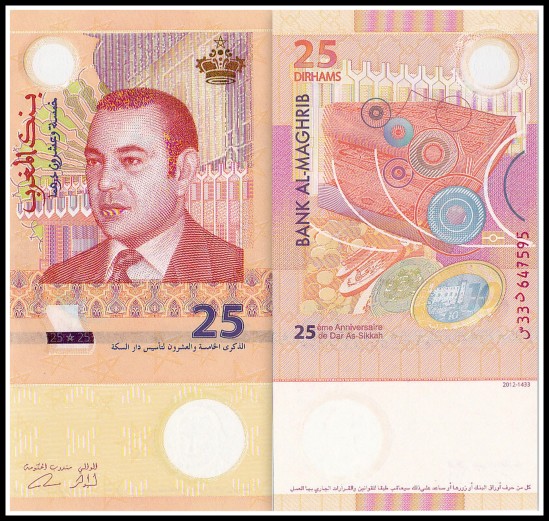 With the advent of hybrid notes, here is another great banknote from Morocco to add to my collection.

* Fortress Paper has announced the launch of the world’s first banknote printed on its new Durasafe substrate, an innovative paper-polymer-paper composite substrate produced at its Landqart mill. The new Swiss 50-franc note had been expected to be the first in the world to use Durasafe, but its introduction has been delayed until 2015 at the earliest due to technical difficulties encountered in the note’s production.

With the issuance of the new Moroccan 25-dirham note in December 2012, Bank al Maghrib, Morocco’s central bank, became the first in the world to issue a banknote printed on Durasafe. The front of the banknote features an intaglio vignette and a watermark of King Mohammed VI, and a magenta/green color-shift security thread developed by Fortress Optical Features. The thread, like the watermark, is embedded inside the banknote yet visible behind a one-sided Viewsafe polymer window. It also has a fully transparent polymer window embossed with the King’s royal crest. The back of the note carries a print vignette commemorating 25 years of banknote printing at the Moroccan State Printing Works, Dar As-Sikkah.

The windows in Durasafe are formed by die cutting each side of the three layer composite substrate separately. One-sided Viewsafe windows give a clear view inside the substrate where the thread and the watermark of King Mohammed VI are protected, but fully visible behind the polymer core. The transparent Thrusafe window is created by die-cutting both the outer paperlayers to reveal only the transparent polymer core.

Chadwick Wasilenkoff, President and Chief Executive Officer of Fortress Paper, commented: “After a decade in development, we are pleased to see the fruits of our labour in the launch of the Moroccan 25 Dirhams. We have designed Durasafe to offer the ideal characteristics of polymer and traditional paper notes to create a new standard for high security banknote substrates. Fortress Paper would like to congratulate the Bank al Maghrib on the launch of their new 25 Dirham banknote and being the first in the world to produce and launch a Durasafe banknote.”

Introduced August 22, 2013, these are the first polymer banknotes to be circulated in Mauritius (25, 50 and 500 Rupees). The 25- and 50-rupee notes were printed by Oberthur Technologies on Innovia Security’s Guardian substrate while the 500 Rupees note was printed on De La Rue’s Safeguard substrate (formerly called Flexycoin). The polymer notes are printed with magnetic ink that becomes fluorescent under ultra-violet light. They also contain a transparent window bearing an image of the dodo – an extinct Mauritian bird that lives on on the front of the country’s notes and coins – and other ‘swing’ features (iridescent, optically variable ink printed on a transparent background.)

Obverse – Inscribed with the image of Bangabandhu Sheikh Mujibur Rahman

Reverse – Inscribed with the image of six Freedom Fighter

I recently went through a couple of local Philippine peso coins in current circulation and found a few intriguing pieces. A few of the coins I found have “weak strikes” if I am not mistaken, I took a couple of pictures along with regular struck or normal struck coins for comparison. This particular picture is of a 25 Centavos dated 2013, the left being the regularly struck with all devices clear while the coin on the right shows some areas in which numbers and letters seem unclear (the coins by the way have AU to UNC details). The date on the obverse and reverse of the coin to the right seem to be struck weaker as compared to the coin on the left.

Weak (Low Pressure) Strikes
Definition: A weak strike results from two proximate causes, inadequate ram pressure or insufficient die approximation (excessive minimum die clearance). Ram pressure is the tonnage applied to a planchet of normal thickness. Insufficient die approximation refers to the minimum approach the dies make to each other in the absence of a planchet. In many cases it is difficult or impossible to assign proximate cause. However, when a weak strike is accompanied by another error, or a weak strike progression can be assembled, the most common proximate cause appears to be insufficient die approximation. The dies simply don’t approach each other closely enough to leave a strong impression.
Ultimate cause is virtually impossible to determine. A weak strike could be due to a loose or cracked press frame, a loose or broken knuckle joint, a mistimed anvil or hammer die, a broken cam associated with either die, a jam-up in the guts of the press, a jam-up associated with an adjacent die pair, a broken circuit breaker, or simply dies that have fallen out of adjustment. A weakly struck coin could also be a test piece, otherwise known as a “die adjustment strike” or a “die trial”. Many weak strikes are labeled as such. But unless you were there the moment it was struck, there is no way to know. Therefore the terms “die trial”, “die adjustment strike”, “test piece”, and “set-up piece” should be abandoned.
Most, if not all weak strikes available in the marketplace appear to be the result of spontaneous equipment malfunction. The evidence for this is abundant and manifold.
1. These errors are far too abundant to represent escapees from a test run. Test strikes are supposed to be set aside and consigned to the furnace for melting. You wouldn’t expect many coins to escape this fate.
2. If these were test pieces, then you’d expect the greatest number of weak strikes to involve the denomination that is produced in greatest abundance – cents. However, weak strikes occur most frequently in dimes. That’s what you’d expect of weakness caused by spontaneous equipment malfunction. Dies that strike thin planchets have a very narrowly constrained minimum die clearance. If the clearance grows just a little bit, the strike will be weak. If the clearance shrinks even slightly, the dies are likely to clash. Thicker denominations have a much more generous clearance range. It is among these denominations that you’d expect to find fewer weak strikes, and this is indeed the case.
3. Weak strikes can be found in association with a wide range of errors – double strikes, triple strikes, saddle strikes, misaligned die errors, clashed dies, indents, partial brockages, full brockages, struck-through errors, etc. Given how rare escaped test pieces are projected to be, multi-error test pieces should be as rare as unicorns.
4. On multi-struck coins, a weak strike can immediately follow a strong strike and a strong strike can immediately follow a weak strike. Such rapid changes in die clearance (or ram pressure) would not be expected in a test run.
5. Weak strike progressions can move in either direction – from weak to strong or from strong to weak. Such a progression can also show an erratic pattern of strengthening and weakening. That’s not what you’d expect of a test run.
6. On saddle strikes, one off-center strike can be strong and the other weak. With respect to saddle strikes on previously-struck coins, the first strike can be weak while the two off-center strikes can be strong. The reverse situation has also been recorded. A weak first strike can then receive a saddle strike in which one of the off-center strikes is weak and the other is strong. None of these patterns is consistent with a test run scenario.
Weak strikes are sometimes confused with grease strikes – coins that are struck through a heavy layer of compacted die fill. It’s actually quite easy to tell the two errors apart.
1. A weak strike will show a poorly developed or absent design rim. A grease strike will show a very well-developed design rim.
2. A weak strike will retain some, most, or all of the planchet’s original proto-rim. The proto-rim is erased in a grease strike.
3. A weak strike will retain the beveled rim/edge junction of the planchet. The bevel will be lost in a grease strike.
4. The edge will be weakly struck and relatively narrow in a weak strike. The edge will be tall and vertical in a grease strike.
5. Reeding will be weak or absent in a weak strike. Reeding will be very strong in a grease strike.
6. In a weak strike, extent and pattern of weakness will be essentially the same on both faces. Uneven weakness is a hallmark of most grease strikes. 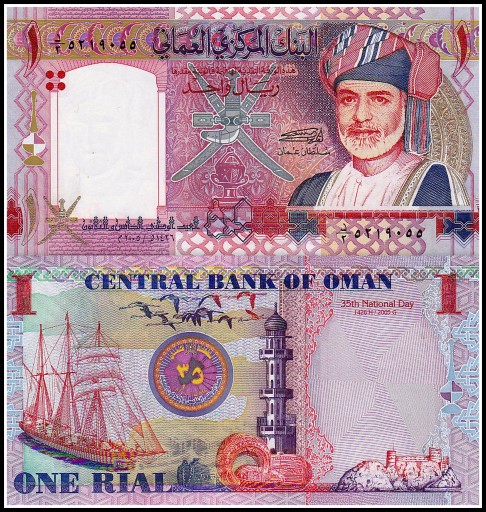 Obverse: His Majesty Sultan Qaboos bin Said; facsimile signature of His Majesty; watermark portrait of His Majesty; the National Emblem (two swords and a khanjar) in the middle; the apex bank’s name (Central Bank of Oman) on the top in Arabic; serial numbers on the right and left sides of the note; denomination in figure on the right and left sides and in words in the middle; the 35th National Day and year of issue (1426 H and 2005G in Arabic at the bottom); Omani adornment in gold behind the portrait of His Majesty; recognition feature for the blind on the left side;
vertical security thread; and an Omani incense burner on the bottom centre.

Reverse: the apex bank’s name in English (Central Bank of Oman) on the top; denomination in English (word) at the left bottom and in figure on the right; 35th National Day logo; 35th National Day commemorative text in English with the year of issue; flagship Shabab Oman; fort Jalali (bottom right); minaret of a mosque (centre); and traditional Omani jewellery (bottom centre).

Krishna Raja Wadiyar III – Majah Rajah of Mysore India. Also known as Mummadi Krishna Raja Wadiyar, he belonged to the Wadiyar dynasty and ruled his state for nearly seventy years, from 30 June 1799 to 27 March 1868. He is a great writer and is also known for his contributions in the arts and culture of his age.

Obverse
Elephant below Kanarese. “Sri” between sun and moon